Last year(s) I made some translations from English to Russian. I strongly believe that these materials are important and educating, so here is the list in the original language.

Radio monitoring for the beginners

From the beginning: communications monitoring

all by Sparks31 (link, mirror and another sources lost)

– Yes. But in the second vehicle something was wrong: they heard us, we cannot hear them. This problem was solved after a long period of time.

– I understand the situation with communications between APCs. What about comms in global view?

– 3-4 km in the open with the use of chinese radios, all the rest of comms by cellular phone. It made me laugh. When we arrived, all bought SIM-cards. I’m calling support of MTS (Ukraine). They tell me:
– you are calling from third region
– oh, yes
– we have subscriber’s plan with all calls within Lugansk and Donetsk region for free
– sure, sign me. Any internet on it?
– yes, this much megabytes a day.
I called it – subscriber’s plan “Separatist”. Completely absurdic. I’m still shocked, why UAF can’t cope with separatists. One jammer – and game over. When MTS dropped service, with Kievstar still in use, about three days we really had no command. At morning arrived a runner by motorcycle, telling orders.

– You have no fear to use phones, in context of spotting [direction-finding]?

– No way without them, till the end of August they carried all command. Somebody said, that he called his mother in Russia, and after that got a mortar fire, but I consider that is not a phones’ fault.

More to read on the subject: Lessons From Ukraine via WRSA

As reported, Ukraine also has R-934. So many intentional misinformation around this stupid war.

– What was the availability of communication equipment?

– About every “three” [three-men team] had a radio. Radios were various, mainly “china-woods”. Not to say they were best, but fit their tasks. Now there are captured digital Motorolas, but with and old codeplugs. [Gugl mistakenly translates it as “firmware”, but it is definitely spoken about codeplugs – Goblin].

– There were military radios?

– In the spoken Lisichansk were ‘105th’ and ‘109th’. Near Debaltsevo this stations almost never used, we mainly worked with “china-woods”. Command level, and spotters had good army radios.

– You told, that during the fight on February 8 you listened to the enemy adjusting AGS [Soviet analogue of Mark 19] fire on you. That is, you had opponent frequency already pre-set?

– “Kenvods” have a dual watch function – one channel with our frequency, one with theirs. We did so: 1-2 men listen their freqs, the rest coming with our.

– Enemy ever jammed your comms?

– Did you use code words on the air?

– Comms were open, therefore near Debaltsevo the code table was made on the three A4 sheets. But, surely, not all used it.

It becomes less funny, more boring and unbelievably stupid. So I totally disagree with Ncscout in the point, that Donbass conflict is an example of how real doings is done. It’s an example of how absurdly war can be fight – and still provide some KIA boxes.

…near Debaltsevo calls for artillery support come through one civil volunteer, inter alia:

Of special note is quite surprising form of the artillery control, generated by this war. [I] seriously contend, that there were no way to call for heavy fire on the target of special importance, recognized with a high degree of certainty, through the headquarters of the sector. Head of sector artillery (they were changing every month and a half), did not know how to do it. But it was successfully done, and more than one time, through one “influential” in this regard, civilian volunteer! Fire of arty, subordinated to ATO command, was called and coordinated through completely civil people, using unexpected but working channels.

END_OF_DOCUMENT_TOKEN_TO_BE_REPLACED

I am fascinated with the idea of code tables. Idea is simple, two-dimensional table with words and phrases in cells. Name horisontal and vertical designator of cell, and send the meaning of cell. 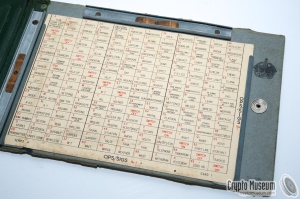 END_OF_DOCUMENT_TOKEN_TO_BE_REPLACED

Funny to read about civil war on the South-East of Ukraine. It is NOT funny war (as any war), but it is funny as hell then it comes to “strange” cases and tendencies.

Sadly, arty recon and main comms came with the next echelon, and 25st btn entered the combat still not established comms and interaction with the BrAG-128 group, and there were no qualified forward observers in the leading combat formations.

Cooperation model between sector artillery and units with no own arty was unacceptable and simply terrible. If GS RF (Russian Federation General Staff – IBC) developed this model for the UAF (Ukrainian Armed Forces – IBC), it can not be worst. The nature and coordinates of targets, as well as following adjustments (if any) came from the infantry commanders mobilized en masse of civilians who have only a sketchy understanding of these processes. This information is passed from the supporting point commander to the headquarters of his battalion and from there to the sector headquarters, where transferred to the headquarters of the artillery sector, which, in turn, passed it, at best, on the OP (firing position) of subordinate sector howitzer battery from the 55th brigade, at worst – to the headquarters of the artillery ATO, which descends to its firing position some of their batteries, respectively, not bypassing the staffs of brigades and divisions! It was and remains uniform diversion! Attempts to break this vicious practice by the officers who understand the full absurdity of this “interaction”, were futile.

And interview with separatist volunteer: http://twower.livejournal.com/1904970.html

– What radios were used?

– There were portable “159th”, “Kenwood”. It does not matter what, ukrops listened for all of them.

– Were mobile phones used for communication?

– Of course. I always told everyone: use. Just go to the “Kyivstar” (cellular service operator – IBC). Almost all ukrops sit on “Kyivstar”. Well, you can still assume that 25 folks with phones may be subject of direction-finding in the fields and hit by arty, but in the settlements, you can safely use phone. What’s the difference: it is a peaceful man with a phone or militia? Or even ukrop’s agents are speaking by phone? I have never seen someone hit by arty after the phone call.

– While communicating, do you tried to encrypt information, used the code words?

– It does not bring any sense. Because all of this must be coordinated: not 1-2 people, but a full chain. And when it’s all going transient, then it makes no sense. Easier to do is turn on the phone and make a call.

– Did you try intentionally to listen Ukrainian transmissions?

– No. What for? Only first [in the initial period of war – note] they spoke by walkie-talkies who will go where. And then wised up and stopped this.

Documenting The Death Of America

Survivalist Communications for the SHTF Prepper

Always assume you are being watched

107 GEAR
the things worth believing in

“The infinite is in the finite of every instant”

A blog about tactical training, general preparedness, and enhancing the lives of free citizens everywhere.

A Blog Dedicated to Survival and Preparedness Communications

Communications for People who know what being "Prepared" Really Means.

Information to Hone Your Edge Against Bad Things

"once more unto the breach, dear friends..."

Amateur radio from a Midwest nerd.

Electronics from Conception to Completion

Succinct articles that help us understand the time in which we find ourselves. This is an Adult site and this is a good read. Like a giant scroll across the sky.

"In this age, I don't care how tactically or operationally brilliant you are: if you cannot create harmony - even vicious harmony - on the battlefield based on trust across service lines, across coalition and national lines, and across civilian/military lines, you need to go home, because your leadership is obsolete." -- Mattis

"There isn't a darknet dark enough to black out 'stupid'."

A blog for UK EDC

EDC for those in the UK, with a bit of survival and prepping too,

Action Gear Supply reporting about threats around the globe